Our studies focus on two areas : the KPZ model and granular gases.

Despite a number of important advances in recent years, our understanding of out-of-equilibrium systems remains incomplete as they are not accessible to perturbation theories. This is the case for reaction-diffusion models and processes described by the Kardar-Parisi-Zhang (KPZ) equation. The latter, due to its symmetries and simplcity, is recognized as one of the corner stones of out-of-equilibrium statistical mechanics. We are currently studying these models using non-perturbative renormalization. The formalism was developed in analogy with the equilibrium approach and by taking into account the specifics of the non-equilibrium physics including the presence of a response field in addition to the physical field, causality and the Îto prescription. The results that we obtained in one-dimension are extremely close to the exact results, effectively validating the non-perturbative approach. In all dimensions we have been able, for the first time, to identify the fixed point of strong coupling that controls the physics of the rough phase of the model. The critical exponents obtained in two and three dimensions are in reasonable agreement with numerical data. Some remaining challenges include finding the upper critical dimension of the model (if it exists), refining the calculation of the exponents and calculating in all dimensions (not just one dimension) the correlation and response functions.

Granular gases consist of macroscopic particles that interact through energy dissipating collisions. When energy is supplied to a granular system it reaches a non-equilibrium steady-state whose properties may be qualitatively different from the corresponding equilibrium system. For example, the velocity distributions may be non-gaussian and there is a lack of equipartition of energy among the degrees of freedom. The dissipative nature of granular interactions allows one to construct different kinds of granular motors. In particular, we have predicted the existence and the behavior of heterogeneous granular motors composed of two materials with different coefficients of restitution. We are currently examining the robustness of the phenomenon by considering the effect of static and dynamic friction. Since granular materials are usually composed of non-spherical particles, we are studying the influence of shape on the behavior of a range of granular systems. Phenomena of interest include the breakdown of equipartion, the non-gaussian velocity distributions and the effect of shear on systems of various non-spherical particles (dumbbells, ellipsoids, needles).

The presence of quenched disorder induces spatial inhomogeneities in systems, which in their pure state are invariant under translation. One consequence is that the behaviour at equilibrium and non-equilibrium of such disordered systems can be influenced by the proliferation of metastable states and collective events that are statistically rare. This is particularly the case for materials in the presence of a random magnetic field and spin glasses. Describing such systems has puzzled physicists for nearly 40 years and requires new theoretical approaches. We have tackled, and partially solved, the problem of the critical behaviour and long-range physics of these models using a functional version of the non-perturbative renormalization group. We have also developed theoretical and numerical methods to study out-of-equilibrium dynamics under the influence of an external force. Applications include magnetic materials in a random field (Barkhausen noise) and the adsorption and imbibition of fluids in disordered porous media.

Disordered Systems and fixing gauge in non-abien field theories.
The problem of gauge fixing in non-Abelian gauge theories boils down to a problem of the extremisation of a functional with many metastable states. The analogy with the physics of disordered systems, in particular the Ising model in random fields, has led us to propose approaches to gauge fixing,. We also study the infrared properties of gauge theories in the context of gauge fixing.

When a liquid is cooled in such a way so as to avoid the crystallization transition, there is a dramatic slowdown in the viscous supercooled liquid phase, which leads to a glass "transition" by which the system becomes a glass, that is, a non-equilibrium amorphous phase. The explanation for this slowdown and its theoretical description is still very controversial. Open questions concern the origin of the phenomenon and the nature of the collective and cooperative effects associated with it. We originally proposed and developed an approach in terms of "geometric frustration" in a model specific to the physics of supercooled liquids. We are also studying collective effects associated with the glass transition using the non-perturbative renormalization group. These effects appear to involve rare phenomena and the existence of a multiplicity of metastable states that can trap the system.

Membranes, whether fluid or polymerized, have long been studied as models for biological systems and random surfaces and relativisitic strings, a conceptually very different area. Interest in membranes has been rekindled thanks to the discovery of graphene – a single layer of graphite - that behaves, in terms of its mechanical degrees of freedom, essentially like an ordered, polymerized two dimensional membrane. This has led us to apply the techniques of non-perturbative renormalization to address i) the nature of the crumpling transition that polymerized membranes undergo as the temperature is varied; ii) the properties of the ordered phase of the membrane. Encouraged by our preliminary results that are in very good agreement with numerical simulations of graphene, we are now exploring a range of diverse effects including disorder, anisotropic elasticity and topological defects on the long-range properties of fluid and polymerized membranes. 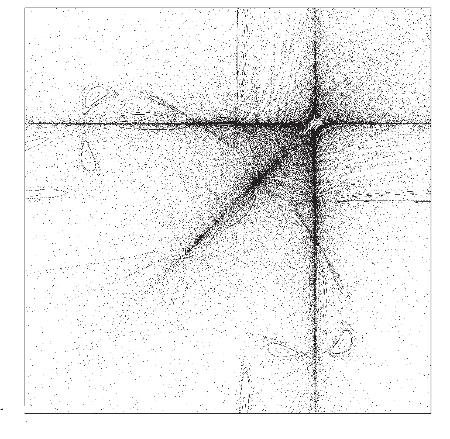 The celebrated exact solution of the two-dimensional Ising model provides a solid foundation for the theory of phase transitions. However, although exact expressions exist for the partition function (Onsager 1944) and the spontaneous magnetization (Yang 1952), no exact result has been obtained for the susceptibility that can be written as an infinite sum of n-tuple integrals. We have obtained many exact results for these integrals that also occur in other areas of theoretical physics (statistical mechanics, field theory, particle physics, enumerative combinatorics, etc.) We first showed that they are solutions of Fuchsian differential equations with rational exponents at all critical points. We then showed that they are solutions of globally nilpotent differential equations and, ultimately, series with integer coefficients. This leads to an understanding of « modularity » that is ubiquitous in theoretical physics. In another area, namely discrete dynamical systems, we have obtained a large number of exact results for birational transformations (which are exact discrete infinite symmetries of all lattice models) including their dynamical zeta functions, the generating functions of the Arnold complexity and their postcritical sets. These results cast doubt on the naive concepts of Lyapunov and entropies.